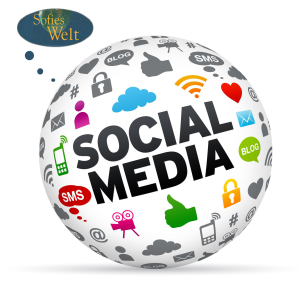 …is the first question Sofie raises, when she starts diving into the history of philosophy in the famous book by Jostein Gaarder [1] and this is the same question I am asking myself now. Who am I ? My name is Sophie, which means wisdom in old greek and that is about as much I have in common with the character Sofie Amundsen from Gaarder’s book. Maybe I am also as curious about many things in life as she is, but what else should I tell you about me; what should I share with you?

In short I am a young woman, 26 years of age – born and raised in Germany, who then left for voluntary work in the UK, who later met a Swedish bloke in France, fell for him and Sweden as a country. Went back to Germany in order to study in my native language, came back for internships and studies abroad. Then finally returned in 2011 and stayed. Now I am standing here with a BA. and a MSc. in my pocket and I don’t necessarily need more university credits. I am here because I am interested in the power of media, the influence of companies and the government as well as the possibilities of raising technologies. I have high hopes and big plans…but do you really know who I am now? Or did I just give you a brief description of what I have been doing for the previous eight years?

The information I presented to you resembles those on social network sites, such as Facebook or LinkedIn. If you combine all data I filled in at social media platforms during recent years it becomes clear, that social media provides a platform for self-presentation itself. Instead of presenting our real identity, we create an image of ourselves, and accordingly project the way we want to be perceived. Kaplan and Haenlein (2010) created a concept where self-presentation, together with self-disclosure, social presence and media richness are key concepts for classifying social media. [2]

The omnipresence of the term social media and its overlapping usage, makes it nevertheless difficult to determine a universally valid definition. For Kaplan and Haenlein social media is a broad term to describe “a group of Internet-based applications that build on the ideological and technological foundations of Web 2.0, and that allow the creation and exchange of User Generated Content”. [2] While other researchers define either parts of this term such as Web 2.0 (see f.ex. O’Reilly [3] or Beer [4]) or forms of social media, such as social networks as a general concept [5], Kaplan and Haenlein see it as an umbrella term for the whole group with similar characteristics. I would like to agree to this notion, but argue that the definition is rather content based and doesn’t include the importance of companies building the frame for social media action. It is true that the transformation of the individual user from passive recipient into an active creator and contributor of the web is an important factor of social media, but social media is nevertheless shaped and controlled by the companies providing those social media products. When talking about social media, we therefore are talking about the exchange of information [6], the collection of data, shifting social processes and the influence of companies on our society.

It is possible that we will find a better way to define social media during the on-going discussion – so stay tuned and try to understand social media together with us.

One thought on “Social me(dia)”