As communication landscape has changed over the last decade, it is true that social media has come up with many opportunities for organizations. For example, if you look at the (online and offline) book stores you will come across many literature about social media and marketing. Some examples to those books are The New Community Rules, Perspectives on Social Media Marketing, Success Secrets of Social Media Marketing Superstars, Not for Free: Revenue Strategies for a New World and so on. It is clear that social media has a great influence to organizations, but in which aspects? In this blog post I will try to look deeper to some positive aspects as well as challenges of social media from organizational perspective.

Basically, when we look at all those books that I have mentioned above, their first point is to explain people what social media is. Basically, they suggest that business executives need to understand social media, so that affective marketing strategies can be created. Secondly, they aim to decode how companies can benefit from social media. It is suggested that, organizations need to learn how to take an advantage of social media in order to make (more) money and reputation.

Organizations aim to reach a maximum audience and connect users using social media. Social media pages of organizations allow its target audience (users) to interact, follow, and have awareness about the latest news/campaigns. We know that, today millions of people are using popular social media websites like Facebook, Twitter, LinkedIn and so on, that companies cannot deny marketing opportunities social media brings. For instance, researches show that the brand awareness and advertisements are more affective if a friend shares or suggests the product, rather than paid advertisement by the company itself [1]. Khang et al. [1] claim that, communication structure shifted from mass communication to interactive digital communication. Thus, companies need to be aware of marketing potential of social media and create successful strategies to proceed in the field. 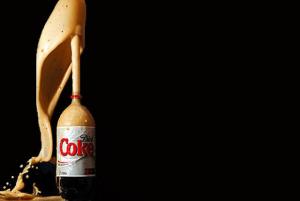 In their article, Kaplan and Haenlein [2] point to a famous video of Coca Cola & Mentos experiment recorded by consumer. The video is known as “Diet Coke + Mentos” uploaded on YouTube, in which artists are making visual show by mixing Coca Cola and Mentos. The authors report that, after the video became famous Coca Cola used the opportunity to market it on TV which is evidence to integration of traditional and social media. Thus, we see how Coca Cola managed to grab the opportunity created by social media and used it in its own marketing.

Although there are many positive aspects, social media can bring challenges to organizations. I do not want to use words ‘negative aspects’ because I believe it is more correct to use ‘challenges’. All the challenges are not necessarily hundred present negative.

For example, we can see that social media played important role during “Gezi Park” protest in Taksim Square, Istanbul. Since the beginning of the protest, 31st of May 2013, Turkish TV channels refused to broadcast what is happening in Taksim Square. 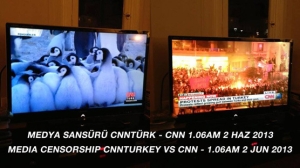 CNN TURK (the branch of CNN news channel in Turkey) became a target for protesters, who blamed the channel for censoring “Gezi protests” and police violence in Taksim Square, Istanbul. CNN Turk was broadcasting a documentary about penguins at the time violence was taking place. The incident was visualized by the following picture, which was spread through social media channels.

Similarly, other national TV channels were not broadcasting any news about the on-going protest.  In reaction of this, many people used social media to organize real world protests in front of the important Turkish TV channels, like CNN Turk, NTV (partner of MSNBC) and Haber Turk, to show that they were aware of news blackout. At the same time, people from all over the country supported the protestors on Twitter and Facebook by spreading their concerns about media transparency. I personally had plenty requests on Facebook asking me to sign for a petition “CNN International must pull its name franchise from CNN Turk”. This petition reached 100.000 signatures by the 10th of June 2013 [3].

At the end of the day, the protests aiming news blackout succeed and protesters managed to get an apology from the broadcasters. The Guardian’s post “Why Turkey’s mainstream media chose to show penguins rather than protests” gives us a brief description of the situation, and the governments’ influence over the Turkish broadcasters. In the post it is also acknowledged that “the chief editors of the major news outlets, and especially NTV, apologized for their failure to inform the public”[4].

The protesters seem to win the battle of media transparency however we have to be aware of the following questions. Would the national broadcasters continue to turn a blind eye if social media had not provided a way for people to raise their voices? How did the protests affect the reputation of broadcasters at both national and international level? How did the petition influence the relations between CNN Turk and CNN International? From this point of view, is it correct to say that the power of social media should be in an organizations’ risk management agenda?

4. Debate, Kerem Oktem for Free Speech, and part of the Guardian Comment Network. 2013. “Why Turkey’s Mainstream Media Chose to Show Penguins Rather Than Protests.” The Guardian. June 9. http://www.theguardian.com/commentisfree/2013/jun/09/turkey-mainstream-media-penguins-protests.